My Name is Hanna Michelson. I am fifteen. I am Latvian.

I live with my mother and grandmother. My father is missing – taken by the Russians.

I have a boyfriend. When he holds my hand, everything feels perfect.

I’m training to be a dancer. But none of that matters now.

Because the Nazis have arrived, and I am a Jew. And as far as they are concerned, that is all that matters.

This is my story.

Disclaimer: I was provided with an ARC copy of the book by Usborne YA in exchange for an honest review. However, all the thoughts, feelings and opinions expressed in this review are my own.

To say this book is an enjoyable read would be all kinds of wrong; but The Earth Is Singing is definitely an impactful read. 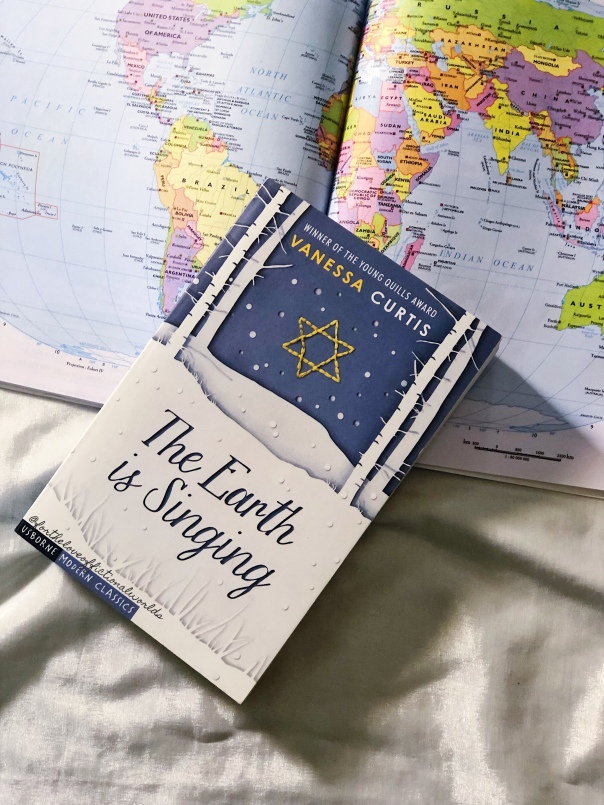 With the background of Hitler’s growing empire and crucification of Jews; I definitely wasn’t expecting this to be a bed of roses but I was definitely ill prepared for the horrors that one community went through only because one man thought his “race” was better than theirs (and yes I know, the current scenarios is eerily similar to the past!).

Told in the voice of Hanna, a young Latvian girl with a Jew Mother and Latvian Father (yes, this distinction is very important!) – with a  bright future ahead; she is a skilled dancer and in love with her best friend Uldin. The only cloud in her otherwise sunny life is that her father was taken away by the Russian Army and so she has no idea if he is even alive right now or not; but she knows in her heart that she will meet him again.

When the Germans start to invade Latvia, they are widely believed to be the saviors of the country. With almost all of them disregarding the scary rumors floating in about the treatment of Jews by the German Army in other parts of the Europe.

“Is this to be my life too?

Will we get through it and somehow get back to normal?

Will I ever find Papa?

It doesn’t take long for the Latvians, especially Hanna, her mother and her grandmother, to realize that their lives, however ordinary they maybe, won’t remain so for long. Slowly, the rules start to change for them, for their friends and it is heartbreaking to see the people they have lived with, dined with; their friends turn their back on them just because they were being persecuted for being Jews.

Throughout reading the book, I had to keep reminding myself that this book is not wholly fiction – sure the characters maybe; but their experiences and their suffering were definitely not; that this is definitely NOT the work of an overactive imagination of a writer. What it does do is reach its goal of waking its readers to actual emotional reactions behind the dry historical facts.

The Earth Is Singing is a book that everyone *NEEDS* to read – written in simplistic yet powerful manner; it is a brilliant cold hard way of waking up to the realization that history is not just dates written in a textbook; but actual reality for humans at one time.

1 thought on “An *Eye Opening, Heartbreaking* First Hand Look at The Atrocities Against Jews in Latvia | ARC Review: The Earth is Singing by Vanessa Curtis”