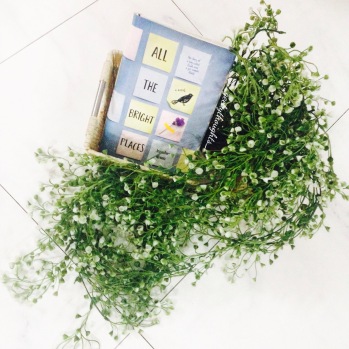 The Fault in Our Stars meets Eleanor and Park in this exhilarating and heart-wrenching love story about a girl who learns to live from a boy who intends to die. Soon to be a major motion picture starring Elle Fanning!

Theodore Finch is fascinated by death, and he constantly thinks of ways he might kill himself. But each time, something good, no matter how small, stops him.

Violet Markey lives for the future, counting the days until graduation, when she can escape her Indiana town and her aching grief in the wake of her sister’s recent death.

When Finch and Violet meet on the ledge of the bell tower at school, it’s unclear who saves whom. And when they pair up on a project to discover the “natural wonders” of their state, both Finch and Violet make more important discoveries: It’s only with Violet that Finch can be himself—a weird, funny, live-out-loud guy who’s not such a freak after all. And it’s only with Finch that Violet can forget to count away the days and start living them. But as Violet’s world grows, Finch’s begins to shrink.

This is an intense, gripping novel perfect for fans of Jay Asher, Rainbow Rowell, John Green, Gayle Forman, and Jenny Downham from a talented new voice in YA, Jennifer Niven. Review:

This was a book that was hyped and apparently quite well liked even before it was released. Infact, most of the bookworms I follow on Bookstagram and am friends with on GoodReads were raving about this book, so of course I bought it – It also helped that it had such a pretty cover 😛

Plus, the fact that this book dealt with suicidal idealizations, was interesting to me on a professional level, being a psychologist myself. And let’s just say this book just… NO. No. NOPE.

“No more winter at all. Finch, you brought me spring.”

The story introduces us to Violet and Finch – both going through their own troubles, both struggling with lives in the most basic way possible. Meeting each other was supposed to be the turning point in their lives, but was it?

Violet is a senior who lost her twin in a car accident. A year later, she is still struggling, and is flirting with the thoughts of suicide – nothing permanent, just abstractly. She is a character I hated at the first meet and sadly, enough I despised her by the end of the book.

She is superficial, irritating and absolutely useless as a character. She thought of herself, without any regard to anyone else – and using her sister’s death as an excuse was just about the time I was done with her. She took Finch for granted, even when she knew that he was fighting a battle and yet she took him at face value.

“Listen, I’m the freak. I’m the weirdo. I’m the troublemaker. I start fights. I let people down. Don’t make Finch mad, whatever you do. Oh, there he goes again, in one of his moods. Moody Finch. Angry Finch. Unpredictable Finch. Crazy Finch. But I’m not a compilation of symptoms. Not a casualty of shitty parents and an even shittier chemical makeup. Not a problem. Not a diagnosis. Not an illness. Not something to be rescued. I’m a person.”

Finch, on the other hand i understood. Not because I have been through what he has but because I saw a friend in him. He was the only real character in this book – a character that anyone of us can actually identify with. He is the person who finds good in everything around him, even as he is filled with despair. He is the one who broke my heart in this book – the only one worth reading about

“It’s my experience that people are a lot more sympathetic if they can see you hurting, and for the millionth time in my life I wish for measles or smallpox or some other easily understood disease just to make it easier on me and also on them.”

I had high hopes for this book. I had hopes that this book would actually be quite delicately dealt with but was it? No. This book had a counselor who was apathetic to Finch’s thoughts and feelings. This book had a family who were mostly unconcerned about Finch’s whereabouts and this book had a girl who was mostly concerned with how Finch affected her than how she could help him.

This book is written by a suicide survivor and as someone who has lost someone close to her to suicide, this book is a disgusting, deprecating version of how suicide idealizations are affecting teens in today’s world. You don’t represent the world in a way that you make your readers (some of whom might have had the same thoughts) believe that suicide is the only option left to them. That there isn’t anybody they can turn to. No. Just no.

You might argue that Finch tried talking to the counselor, his mother, and even Violet but wasn’t able to make them understand. No. You don’t blame the person for suicide. You blame the world for the fact that they actually believed they had no choice but to take their own lives. You think that just because they took their lives you believe that they were to blame? Well, screw you. Please do not think that I am not telling you that ending should have been changed, no, but at least you could have made the characters and the plot a little more believable.

As an author, Ms. Niven, you have readers who will actually be influenced by what you write, so you told them that there is no one turn to? When you have young minds to influence, at least write responsibly. While I do not mean to disparage your experience with suicide, do not generalize the guilt you felt to the whole world and most especially, to the one who actually felt that they had no option but to leave this world.

To those who have had these thoughts, believe that you are precious no matter how hard is to. for there are people who love you, who will always love you. You don’t have to be always smiling to keep everyone happy. It is hard, in fact it will be the hardest thing you will ever have to do – but you will trust the one person to pull you out of that abyss that you find yourself in. Because believe me when I say this – You are precious and you are loved. Always.

(Only for Finch – for all the Finch’s of the world.)

I will never recommend this book to anyone. Ever.

4 thoughts on “Review: All The Bright Places by Jennifer Niven”