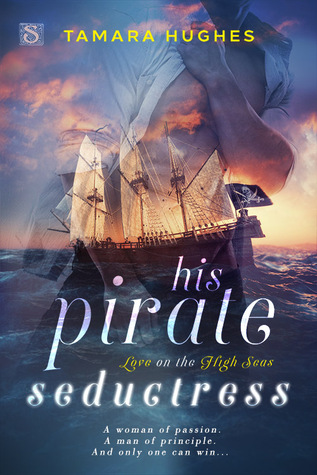 With her son’s life in the balance, Catherine Fry is forced to locate and steal the priceless Ruby Cross of the Knights Templar. She knows who has it—it’s just a matter of coercing Thomas Glanville, the handsome and incredibly stubborn captain of the ship she’s captured, into telling her the exact location. Fortunately, Catherine knows that there are many ways to get a man to talk…

Captain Thomas Glanville has the cross and he’ll be damned if he’s going to hand it over now that he finally has the means to buy a ship of his own. He’s at the mercy of a fiery woman who will stop at nothing to achieve her goal. But Catherine has no idea who she’s dealing with—and Thomas has his own means of charming a woman into his mercy and his bed…

I received an eARC of the book via NetGalley in exchange for an honest review.

Disclaimer: This is the third book in the Love on the High Seas series but can be read as a standalone.

Pirates are awesome!! I love pirates, so the fact that the title of this book suggests a female pirate? HOT DARN! I couldn’t resist myself from requesting this book and I am so so glad that it absolutely delivered on all my expectations!

Catherine is a woman on a mission – to steal the priceless treasure but not because she wants it for herself, but because she need it to save her family. Now if only the pesky attraction to man holding that treasure wasn’t getting in her way!

Thomas Glanville is also on a mission, but more of a selfish one – to prove to his brothers that he is worthy of his family’s name after all! But he really wasn’t expecting to be set on by a pirate, especially not of the female variety! Well, isn’t this going to be a problem!!

I ABSOLUTELY LOVED THIS AUTHOR’S STYLE OF WRITING – because this book has absolutely everything – a strong, freaking strong heroine who while she understands her limitations, is never set by them and a hero who is cocky, narcissistic yet somehow on a deeper level connects with the heroine.

I loved Catherine and Thomas’s way of communicating with each other – it is snarky, even in dire situations and made my heart go soft even in situations that were supposed to be hilarious! There is action, romance, and angst and the plot is so freakishly well written that it was almost impossible to predict the next turn – yes I said almost, because it took me a few chapters but once I got the hang of Ms. Hughes’ writing style, there was a bit predictability in this book. But I loved it still the same, BECAUSE PIRATES!! 😀