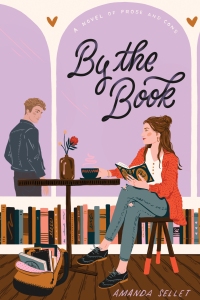 Mary Porter-Malcolm has prepared for high school in the one way she knows how: an extensive review of classic literature to help navigate the friendships, romantic liaisons, and overall drama she has come to expect from such an “esteemed” institution. Her love of literature even inspires her to imagine herself the heroine of a nineteenth-century novel. Not the sort who makes poor life choices and ends up dying of consumption while still in her teens, but the noble, virtuous, quick-witted type.

When some new friends seem in danger of falling for the same tricks employed since the days of Austen and Tolstoy, Mary swoops in to create the Scoundrel Survival Guide, using archetypes of literature’s debonair bad boys to signal red flags. But despite her best efforts, she soon finds herself unable to listen to her own good advice and falling for a supposed cad—the same one she warned her friends away from. Without a convenient rain-swept moor to flee to, Mary is forced to admit that real life doesn’t follow the same rules as fiction and that if she wants a happy ending, she’s going to have to write it herself.

Mary Porter-Malcolm, a teenager, with her nose perpetually within a book (sound familiar? Because I swear, I am drowning in nostalgia for my own teenage years!); is now facing the prospect of starting a new school – even if there is only a single person she knows at the new school, who immediately ditches her on the first day itself (oh the horror!). So when she overhears three young classmates talking about a boy, who she knows is a “cad”.

Armed with her knowledge of the different types of men as evidenced by the different men demonstrated in the classical literature, Mary along with her new friends; try and find the best example of those boys in their real life.

This was such a wholesome young adult romance – but it is also more than that. You have a large family (not dysfunctional *squeaks*), supportive and with loveable idiosyncrasies and female friendships that is uplifting, kind and loyal without putting down any other females within the story!

And let’s not forget the charming, flirty “cad” that Mary thinks has the eyes for her new friend, but does tend to flirt with every girl around him; and now has taken to somehow always pull her into conversations she has *NO* reason to indulge in – the cheek of him. But is there something she thinks she is missing to understand in these encounters?

I adored the way that the author has put forth a wholesome familial relationships and friendships with almost no drama (yes there is drama, can there be any YA novel WITHOUT drama?) but it was still perfectly balanced with that teenage angst and definitely worth a binge – read!

And the fact that the author took time to actually share exact classics she has taken inspiration from? Cherry on top!

Prize: Win a copy of BY THE BOOK by Amanda Sellet (US Only)

Here’s a secret I’ve never told anyone: Sometimes I pretend my life is happening inside a book. I’m the main character, and there’s a narrator following me around, describing everything. Her piercing cerulean eyes gazed wistfully into the distance as an errant breeze caressed her lustrous auburn tresses . . . Et cetera.

Obviously I’m the good kind of heroine, not someone whose poor life choices will lead to her dying of consumption while still in her teens. And I’m wearing a long dress, and maybe there’s a handsome stranger in the distance. Beyond that, the story is vague. Possibly because my real life has always been light on plot development—until today.

The beginning of the upending of my life took place on a sweltering August afternoon, the summer before my sophomore year of high school. I was lying on the couch, immersed in the story of a genteel family with too many daughters and not enough property. The slow rotation of the ceiling fan ruffled the pages of my book. If I held perfectly still, it was possible not to sweat.

“Mary,” said my mother’s voice, summoning me back to the present. “Can I see you in my office?”

There was no clap of thunder or eerie howling in the distance. The sun continued to blaze down from a cloudless sky—or so I imagined, not having been outside. Apart from the mild annoyance of being interrupted in the middle of a crucial scene, I had no presentiment of doom. After fumbling for my bookmark, which had slipped between cushions, I levered myself upright.

When I hobbled into the office on limbs stiff from too many hours in the same position, I was surprised to see my father seated at one end of the desk. Usually he (and Mom) preferred it when he worked in a different room.

“What’s up?” I asked, lifting a stack of literary journals from the threadbare armchair so I could sit.

“Mary.” Dad leaned forward on his stool, hands cupping his knees. “How would you like a new . . . lunchbox?”

“The one I have is fine. Why?” Being observant by nature—reasonably skilled at reading a room, deciphering subtext, sniffing out the nuances of human behavior—I had an inkling there was more to come.

Dad blotted his temple with the back of his wrist. “Well. As you know, there are things in this life that endure, and others that are more—” He paused, squinting at a framed poster of the Bloomsbury Group, as if one of them might supply the missing phrase. “Transitory.”

“And you think my lunchbox is going to stop existing?” I looked to my mother for enlightenment.

She inhaled as if preparing to plunge into the watery deep. “What your father is trying to say is that you have to change schools.”

Dumbfounded, I struggled to make sense of her words. I’d been at the same school since I was three, a ramshackle on-campus facility catering mostly to the children of professors. It was small, and smelled like old shoes when it rained, but it was also a second home. I knew every rip in the carpet and limp beanbag. “Are you serious?” I finally managed to ask.

“The school’s grant wasn’t renewed.” Among my mother’s gifts was the ability to pack a world of disapproval into the briefest of utterances.

“And they just figured this out? Summer’s almost over.”

The two of them exchanged a furtive glance.

“The possibility presented itself some time ago, but the situation wasn’t definitive until quite recently.” Dad gestured vaguely. “A month or so—”

“Two at the most,” Mom cut in. “We thought it best not to upset you while there was still a chance the issue could be resolved. Plus we had the symposium in Chicago, and then the twins were getting ready for the Shakespeare festival, not to mention Cam’s tournament.” Her eyes slid to me, clearly hoping for some version of Oh wow, you’re right, that was hectic, but I was more concerned by the revelation that they’d known about this in the spring.

“But what am I going to do? This changes everything.” A vision popped into my head: setting off on the first day only to have one of them call after me, By the way, Mary, your school no longer exists.

My mother squared her shoulders. “There was very little choice involved. Private school isn’t an option for us. It was Millville High or the circus.”

While we weren’t paupers, all of us understood that a family of seven had to observe certain economies to get by on an academic pay scale. That didn’t excuse leaving me in the dark for so long.

She rolled her eyes, a gesture reminiscent of the sibling in question. “No doubt your brother will be delighted.”

“You haven’t told him yet.” The part of me that kept a running tally of which sibling got what was relieved. It was important to make sure the privileges of birth order were respected, even when the rest of the universe was falling apart.

“Jasper is enough of a contrarian to think middle school will be fun.” Mom huffed through her nostrils, in case we’d missed the sarcasm.

“And so will Millville High,” Dad said with forced cheer. “Especially with your sister there to take you under her wing.”

Despite this assurance, I found it hard to imagine Cam playing nursemaid. She was going to be a senior, and captain of the field hockey team, with a busy life of her own. I could go to her in dire straits, or if I needed to intimidate someone, but it wasn’t as though we spent a lot of time hanging out together now. I didn’t bother explaining this to my parents. There were too many other things to worry about.

“So I’m going to Millville High in—a week?” I glanced at the calendar on the wall, each month featuring the idyllic childhood home of an English novelist. “And I’ll know one person, and everyone will look at me and wonder why a sophomore can’t figure out where her classes are or how to open a locker or anything else that happens at a normal high school?”

“Pooh pooh.” My father was the only human being I knew who actually said those words, instead of using them as a verb. “Of course not. Anjuli will be there, too.”

Debut author Amanda Sellet had a previous career in journalism, during which she wrote book reviews for The Washington Post, personal essays for NPR, and music and movie coverage for VH1. These days she lives in Kansas with her archaeologist husband and their daughter.

1 thought on “A Cute Wholesome & Adorable Literary Inspired YA Romance <3| Blog Tour – Review: By The Book by Amanda Sellet”