WELCOME TO THE BLOG TOUR FOR LIFE BELOW (The Final Six #2) by Alexandra Monir- A Fantastical Sequel To A Science Fiction Favorite!- CHECK OUT MY REVIEW + AN AMAZING GIVEAWAY (US/CAN) ON THE BLOG TODAY ❤ 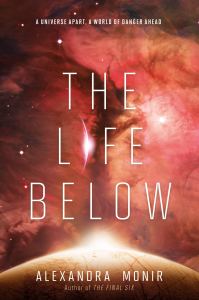 As Naomi lifts off into space and away from a rapidly deteriorating Earth, she watches the world fade away, and along with it Leo, a Final Six contestant she grew close to during training. Leaving Earth behind is hard, but what’s ahead, on Europa, could be worse. The International Space Training Camp continues to hide the truth about what happened to the last group of astronauts who attempted a similar colonization but failed mysteriously. With one shot—at this mission and to Europa—Naomi is determined to find out if there is alien life on Europa before she and her crew get there.

Leo, back on Earth, has been working with renegade scientist Dr. Greta Wagner, who promises to fly him to space where he can essentially latch on to Naomi’s ship. And if Wagner’s hypothesis is right, it isn’t a possibility of coming in contact with extraterrestrial life on Europa—it’s a definite. With Naomi unaware of what awaits, it’s up to Leo to find and warn her and the others.

With all the pieces of their journey finally clicking into place, everything else starts to fall apart. A storm threatens to interfere with Leo’s takeoff, a deadly entity makes itself known to the Final Six, and the questions the ISTC has been avoiding about the previous failed mission get answered in the worst way possible. If the dream was to establish a habitable domain on Europa… the Final Six are about to enter a nightmare.

Okay. Its been ages since I read The Final Six; so I had to go back and refresh my memory (you can read my review here) but I do remember it having a plot that I was absolutely fascinated with!

But let me be clear; this is NOT a standalone – it is part of a duology that should be read in order, or you will be lost like this group of teenagers might be in space; while trying to find an inhabitable planet for us Earthens to live in, considering the mess we have made of our current planet!

With The Life Below, Alexandra Monir has given us a sequel (and an ending) that deserved a whole round of applause. No matter, how much we cheer for teenagers to be our saviours in fiction – it isn’t exactly a probable scenario; for readers to digest that the fact the fate of our planet rests on the shoulders of hormonal teenagers, no matter how brilliantly it is written 😛

But suspending that fact was easier with this sequel – amazingly written; with an addition of the spookiness of being in the space – and the fact that it is a do or die situation; had me on tender hooks, every single time I turned the page (figuratively!).

I had known that this would be a duology; but that ending? Now that ending has me questioning everything I had ever known about this world – The author has done fan – freaking – tastic job of actually building up to this EXACT endingl but you wouldn’t know for sure until you actually reach the last page!

Prize: Win a copy of THE LIFE BELOW by Alexandra Monir (US Only)

Alexandra Monir, Iranian-American author and recording artist, has published five novels for young adults, including her popular debut, Timeless. A Barnes & Noble best-seller and one of Amazon’s “Best Books of the Month,” Timeless and its sequel, Timekeeper, have been featured in numerous media outlets and been published in different countries around the world. She followed the duology with Suspicion and The Girl in the Picture, both standalone YA thrillers. Her upcoming science fiction novel, THE FINAL SIX (March 6, 2018) was acquired by HarperCollins and Sony Pictures during the same week, in two major pre-emptive deals.

Alexandra is also a singer/songwriter who often integrates music into her books’ pages. She wrote and recorded three original songs to accompany Timeless and Timekeeper, which were released as the album “The Timeless EP” and distributed by Jimmy Buffett’s record label, Mailboat Records. She also recorded a song that was released with the publication of Suspicion, and is composing a stage musical geared toward Broadway. Her musical roots are deep, as she is the granddaughter of the late Monir Vakili, the foremost Iranian opera singer.

Alexandra Monir is a frequent speaker at middle schools and high schools across the country, and at major events including fan conventions, women’s leadership conferences, and book festivals. She is a member of the Iranian American Women Foundation, an organization near to her heart. Alexandra currently lives in Los Angeles with her husband and newborn son. To learn more about Alexandra, visit her online at www.alexandramonir.com.