“A splendid tale of faery magic and adventurous siblings, all told in gorgeously rendered watercolor panels: this is exactly my kind of thing.” —Ben Hatke, author and illustrator of the New York Times bestselling Zita the Spacegirl trilogy

“It’s got dragons. It’s got drama. It’s got depth. And it’s got me impatiently awaiting Ethan M. Aldridge’s next eye-popping adventure.” —Tim Federle, award-winning author of Better Nate Than Ever and Five, Six, Seven, Nate!

“A compelling story about finding identity in a world where magic dangers lurk just around the corner. I loved Estranged!” —Molly Ostertag, author-illustrator of The Witch Boy

“As richly imagined in the full-color illustrations, the worldbuilding is both accessible and as familiar as those genre stalwarts… this should easily resonate with preteen and teen fans of both Holly Black and Neil Gaiman.” —Kirkus Reviews

“Worthy of inclusion in any fantasy collection.” —School Library Journal

“[F]un, daring, and dark…with themes and art that fall into the realm of Neil Gaiman, Michael Ende, and Jim Henson. Coupled with the beautifully toned watercolor art, the interdependence of and tension between the two protagonists makes this book stand out.” —Publishers Weekly

“The deliciously captivating start to this adventure series will leave readers hungry for more.” —Booklist 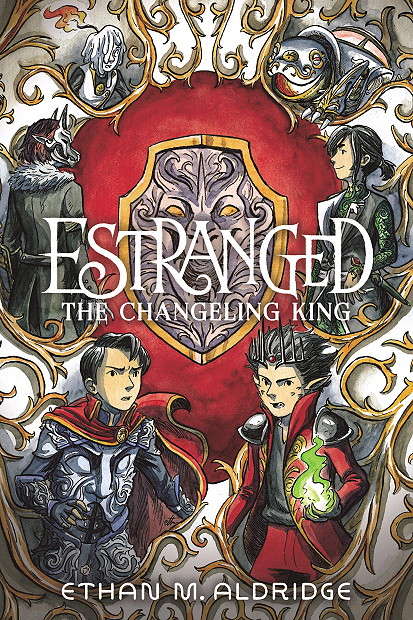 Enter a world of faerie magic and epic adventure in this spellbinding sequel to Estranged—a rich fantasy graphic novel perfect for fans of Amulet.

After years of pretending to be human, the changeling Edmund Carter has assumed his rightful role as Cinder, king of the World Below. But not everyone at the royal palace is happy about his return.

Meanwhile, Ed is adjusting to human life in the World Above. His birth family treats him with a kindness he never knew growing up in the Fay court, but Ed misses the sense of purpose he had as a knight.

When a mysterious new threat emerges in the World Below, Cinder must call on Ed and their older sister, Alexis, for help. But nothing can prepare them for the family secret that awaits at the end of their perilous quest.

With over two hundred pages of gorgeous watercolor paintings, The Changeling King invites readers on an epic journey through a magical world—one they will not soon forget.

Disclaimer: This is the second book in the Estranged World – and while it took me a little while to understand the plotline (I picked this one up first!) – it would of course be infinitely better if you picked the first book – Estranged – up first.

Ethan Aldrige has a created a rich fantasy world in this series – beautifully and succinctly illustrated – He has created a world that I so definitely enjoyed getting myself lost in!

Here’s gist of the series (as far as I have understood it) – Cinder and Ed are two young boys who were switched at birth – Ed (now known as Cinder) is a changeling who lived with his secret in the human world (World Above). His powers as a Fae make him an oddity from everyone in the World Above.

The Childe/Cinder (now known as Ed) lived in the Fae World Below. His being a human child made him an oddity as well in his world; with his only companion is a golem named Whick.

There are a few things missing from my understanding that would only be complete if (and when) I pick up the first book in the series – Estranged; but still lets persevere in the review for the current book in discussion, shall we?

King Cinder is trying to adjust to the fact that he is now the Fae King of the World Below – and with this responsibility comes the obligations of overseeing the whole world; but most especially the Council Meetings which, almost always inevitably ends in Goblins and Fae wanting each other’s blood, preferably in the most gruesome way possible.

But even through it all, he has understood the main issue at hand – that the magic is getting weaker and it’s his responsibility to keep it from disappearing altogether.

On the other hand, our human Ed is trying to navigate the World Above with his birth family and he does this by being the most perfect son and brother in the history of teenagers. While his parents and his sister appreciate it; they are still worried, especially considering the fact he is still trying to find his purpose.

A letter from King Cinder asking for help – bring his parents and his sister, Alexis spring into action to help his brother!

This is a Graphic Novel – and as such makes it a fun and an easy read – meaning I completed it within a couple of hours of starting it! This installment is richly illustrated as well as has the depth of a brilliantly weaved fantasy that I honestly forgot for a second that I was reading a graphic novel!

The ending, though alludes to a third installment and it is one that I will be keeping my eye on – for I want to see these strong boys facing another adventure with each other

WIN: 5 Winners will receive a Copy of THE CHANGELING KING by Ethan M . Aldridge

Must be 13+ to Enter. International Giveaway

Ethan M. Aldridge is a bestselling author and illustrator. He is the creator of the fantasy graphic novel ESTRANGED (a Junior Library Guild selection, Indie Bestseller, and YALSA Great Graphic Novel For Teens), and it’s follow up THE CHANGELING KING (coming fall 2019).

Ethan was raised in a small town in Utah. Growing up, Ethan’s favorite things to draw were monsters and whatever dinosaur he liked that week. He now does more or less the same thing for a living. Ethan lives in New York City with his husband, Matthew, and their dog, Kitsune.

Ethan has had the pleasure to create work for HarperCollins Publishers, Penguin Random House, and EA Games.