IF YOU SAY SO, an all-new addition to the KPD Motorcycle Patrol series from one of my favourite author Lani Lynn Vale, is available now – read my review; and don’t forget to grab a copy for yourself ❤

Gabriel Luca Maldonado, III and Francesca Leandra Solomon were meant to be. They were so in love that everybody prayed for what they had.
Everything was glorious. They would get married, have children and live a perfect life. She would be a doctor in the emergency room once she finished her doctorate, and he would be a badass Navy SEAL and save people for a living.
But then Luca is deployed across the world, and per military regulations, Frankie isn’t allowed to follow.
They’ve overcome a lot in their short relationship, and they can overcome this, too. Two years was a piece of cake. She’d finish her schooling and wait for him. And when he finally returned home, they would marry.
But two months into Luca’s deployment, the unthinkable happens, and Frankie is left alone and heartbroken, knowing that she’ll have to face the rest of life without Luca at her side.
***
Fast forward two years, and Frankie is exactly where her fiancé’s father left her, in a pit of despair that she has no hope of ever finding her way out of.
She lives life one second at a time, depressed and alone, hoping tomorrow won’t hurt like today.
She finds a job, moves, and hopes that the nightmares won’t swallow her whole.
But just as she thinks that she’s getting better, one of her nightmares walks through the doors of her ER, and that nightmare has a name.
Gabriel Luca Maldonado, III. In the flesh.
Also healthy and whole, and definitely no longer missing.
Sadly, it only takes her a half a second to realize that the man that left her isn’t the same man that returned.
The old one wanted her. The new one? Well, he’s definitely not interested anymore.

I have been stoked to read Malachi Stokes (pun so totally not intended) ever since he was introduced in Sinners Are Winners (Read My Review) and I just knew that Ms. Vale would be delivering one heck of a romance and I wasn’t disappointed! 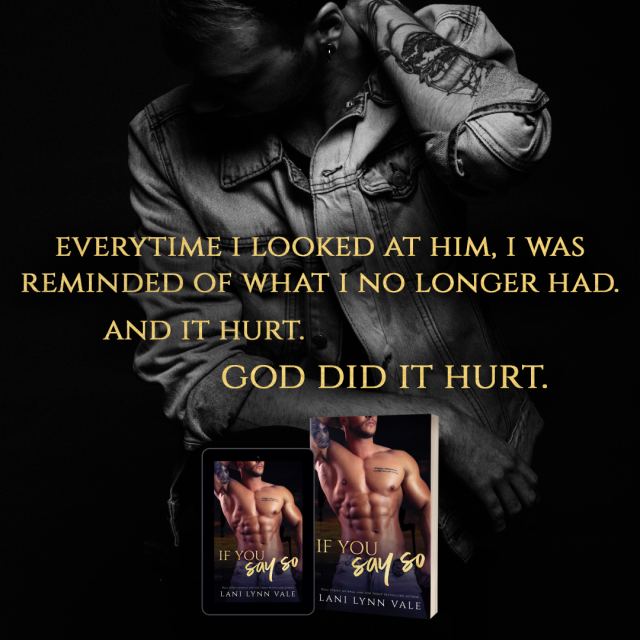 Malachi, has just returned to Kilgore, released after a year in captivity – and that has left him scarred, inside and out. He has no memories of who he is, who he was and what he was – all he had were his dog tags and that’s the only proof of identity he has. It doesn’t change the fact that he feels like an imposter; nothing seems familiar and nothing ever brings back even a hint of his memories back.

He is surrounded by people he has known his entire life, but doesn’t recognise a single one; he was told his best friend, Luca lost his life; but can’t even seem to muster an image of him. All he knows that he feels crappy and shitty for being attracted to the one woman he shouldn’t be even thinking about – his dead best friend’s fiancé, Frankie.

Frankie has always loved Luca; she just can’t seem to remember a time when she didn’t. She promised to wait for him, when he was deployed; and when that wait turned to forever, it was just her going through the motions until she comes face to face with her dead fiancé’s best friend, Malachi – she shouldn’t be attracted to him, she shouldn’t be forgetting Luca already; but there’s something between them that she just can’t ignore.

I wish; I really wish I could talk more about this book and exactly what happens but I can’t; I really SHOULDN’T – mostly cause the blurb is misleading and trust me, when I tell you, that this romance, this book is far better enjoyed when you go in blind without any expectations or even opinions. JUST READ IT ALREADY! Lani Lynn Vale is a USA Today Bestselling Author of over thirty titles. She is married with three children, two dogs, two cats, a donkey, and a couple (a couple also meaning over twenty) chickens.
When she’s not writing, you can find her curled up in her favorite chair reading.
Lani is married with three children and lives in the Great State of Texas.
Stalk Lani Lynn Vale:
Facebook | Instagram | Website | Twitter | Goodreads | BookBub