A nobleman’s daughter with magic in her blood. An empire built on the dreams of enslaved gods. Empire of Sand is Tasha Suri’s captivating, Mughal India-inspired debut fantasy.

The Amrithi are outcasts; nomads descended of desert spirits, they are coveted and persecuted throughout the Empire for the power in their blood. Mehr is the illegitimate daughter of an imperial governor and an exiled Amrithi mother she can barely remember, but whose face and magic she has inherited.

When Mehr’s power comes to the attention of the Emperor’s most feared mystics, she must use every ounce of will, subtlety, and power she possesses to resist their cruel agenda.

Should she fail, the gods themselves may awaken seeking vengeance…

Empire of Sand is a lush, dazzling fantasy novel perfect for readers of City of Brass and The Wrath & the Dawn.

Disclaimer: I received a physical ARC of the book from Hachette India in exchange for an honest review! However, the thoughts, opinions expressed in the review are entirely my own.

Empire of Sand is a fantasy inspired by Indian history and written in a way that makes it easy for the readers, not only to understand the world inhabited by the protagonists but also to immerse themselves in it.

Set in the desserts, this fantasy has a strong plotline with a female protagonist, Mehr, you can’t help but admire and respect with a ritual that is purely inspired by the “tandava” dance performed by Lord Shiva (known as the God of Destruction in the Indian mythology) and his wife, Parvati to restore balance in the universe – a fact that I only connected when I read Ecstatic Yet Chaotic Review – she is by far one of my favourite reviewers ever!

In fact, this ritual is the foundation of the plotline in Empire of Sand – for the Great Almight of the Ambhan Empire – the Maha – is obsessed with this ritual, this dance of the Gods, not to restore the balance in the universe, but to control the dreams of Gods, a control that has allowed him live beyond his life; a life that now looks to be immortal to his followers.

Mehr, our protagonist, is the eldest illegitimate daughter of an Amban Governor – illegitimate because her parents never married by the laws, and her mother, a member of the Amrithi tribe, abandoned her and her younger sister, Arwa years back. While Mehr adores her younger sister, she keeps her distance from her, for her step-mother wants her to bought up on Ambhan traditions. 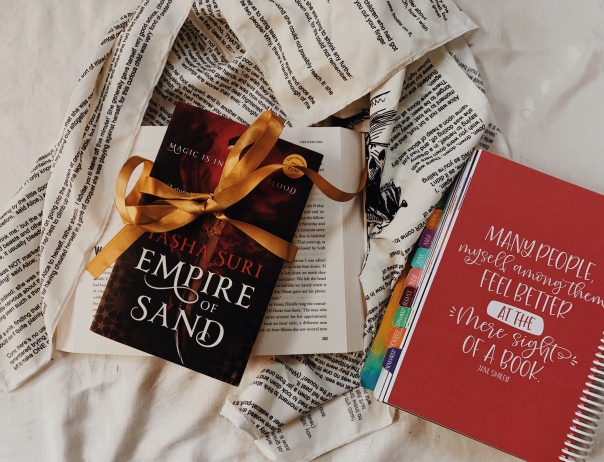 Even though, Amrithi traditions have long since been outlawed, the only solace Mehr has in her life is learning and performing the rituals of her mother’s tribe, that makes her feel closer to that part of her legacy. But one such ritual that she performs, brings the attention of Maha’s followers on to her, and the legacy of her blood.

A marriage proposal that can’t be denied and a marriage later, Mehr and her husband, Amun end up in the crosshairs of Maha – a man masquerading as God to the Ambhan Empire; who needs Mehr and Amun’s marriage, for them to perform the dance of Gods to control their dreams.

It doesn’t take long for Mehr to realise that Maha isn’t the benevolent God, but a cruel and treacherous master and her husband, Amun is the only one she can trust to be on her side. Both Mehr and Amun need to work together to foil Maha’s plans and to free themselves from what is essentially a life of slavery!

The author has done a dazzling job of putting forth a story that will pull you in right from the start  – and along with the plot, has given us characters that we can invest ourselves in but most of all, she has given characters who work WITH each other.

A slow burn romance between Mehr and Amun also makes for a better part of the plot – but it’s a sweet romance that doesn’t become saccharine in its essence. It’s a connection that as a reader, you cheer for throughout the plot.

The book, itself concludes at the end – by that I mean, there is a sense of closure, when you close the book; which I definitely LOVED but at the same time, there are some loose threads, which I hope will be handled in the sequel – Realm of Ash – releasing at the end of 2019!

2 thoughts on “A Simple Yet A Binge Worthy Fantasy Inspired by The Indian History! <3 | ARC Review: Empire of Sand (The Books of Ambha #1) by Tasha Suri”