The Near Witch is only an old story told to frighten children.

If the wind calls at night, you must not listen. The wind is lonely, and always looking for company.

And there are no strangers in the town of Near.

These are the truths that Lexi has heard all her life.

But when an actual stranger-a boy who seems to fade like smoke-appears outside her home on the moor at night, she knows that at least one of these sayings is no longer true.

The next night, the children of Near start disappearing from their beds, and the mysterious boy falls under suspicion. Still, he insists on helping Lexi search for them. Something tells her she can trust him.

As the hunt for the children intensifies, so does Lexi’s need to know-about the witch that just might be more than a bedtime story, about the wind that seems to speak through the walls at night, and about the history of this nameless boy.

Part fairy tale, part love story, Victoria Schwab’s debut novel is entirely original yet achingly familiar: a song you heard long ago, a whisper carried by the wind, and a dream you won’t soon forget.

V.E. Schwab is an author who has definitely made an impact on me as a reader – not only are her books brilliantly designed to mind f**k her readers, exquisite plotlines, intriguing twists and turns, they also have some of the most strongest and attention worthy characters – all of this equals to some of my favourite binge worthy reads of my life as a book blogger and reader; especially when you NEED to get lost in the fictional worlds rather than focus on the real one.

The Near Witch is Ms. Schwab’s debut novel, so it is imperative to keep in mind that the progress she has made as a writer needs to be disregarded.

Does this mean that The Near Witch isn’t worth getting lost into? It Absolutely Is!

I was absolutely enchanted with this book right from the start and that attention never wavered, not once throughout the time I spent reading this book.

The Near Witch is a word full of magic, witches and first loves ruled by fear, superstition and characterised by some of the most relatable characters. In Near, a small town, as such towns are, everyone knows everyone – Lexi lives with her mother and younger sister. She lost her father recently, a hunter by profession, he taught everything he knew to his daughter, a daughter who wants to follow in her father’s footsteps.

Yet she knows that she won’t be allowed to, for her town has some very set roles for both genders and rules (rather superstitions) everyone needs to follow to have a harmony filled life.

“Fear is a strange thing,” he used to say. “It has the power to make people close their eyes, turn away. Nothing good grows out of fear.”

It is however, when a stranger arrives into town in the dark of the night, that everything starts to crack under the pressure – young children are slowly disappearing, and all the town folk start blaming the newcomer. It is only Lexi who thinks to look further than the just the appearance of the newcomer as a clue to the disappearances.

Our heroine is feisty and crafty – a combination that helps her even in the tightest of situations; and her character growth shows that the foundation of Ms. Schwab as a writer was already established. 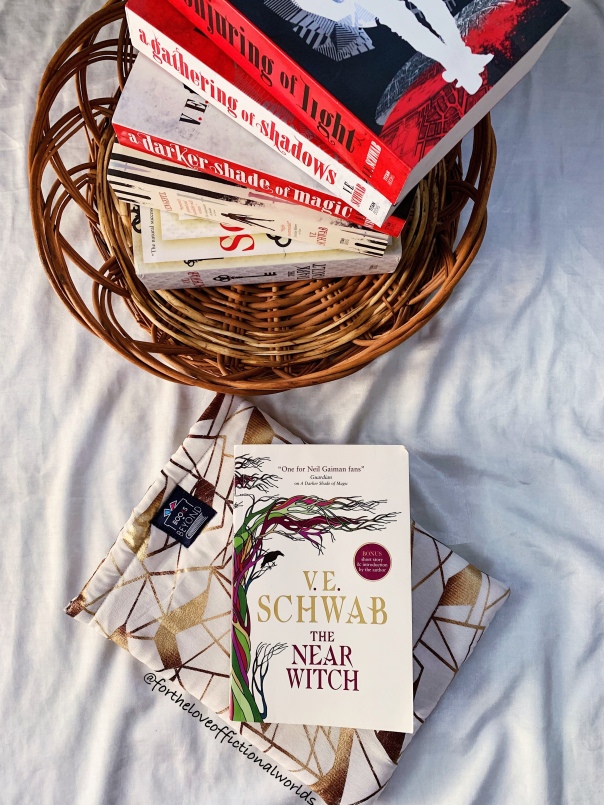 It is the plot, however that captures the bulk of the reader’s attention – it is creepy in just the right places, whimsical in others and emotional at other times – a combination that captures the attention of a reader who can’t help but be drawn into the world that the author has weaved.

This book also had an additional short story – the back story of the stranger/newcomer in the town of Near; which I must say was a brilliant addition – mostly cause this was a single POV story, and this addition gives us a much greater insight into the actions and the thought process of the Stranger.

Lastly, even though The Near Witch is predictable at times, it is nevertheless a simplistically written, whimsical fairytale that grabs the attention of the reader right till the end.

2 thoughts on “A Magical & Whimsical Binge Worthy Debut From a Favourite Author | ARC Review: The Near Witch (The Near Witch #1) by Victoria Schwab”