TODAY ON THE BLOG, WE HAVE TWO AMAZING COVER REVEALS FROM A FAVOURITE AUTHOR OF MINE of the TWO BOOKS IN HER NEWEST SERIES – Air Kiss (Running on Air 0.5) &amp; Off The Air (Running on Air #1) by L.H. Cosway ❤ 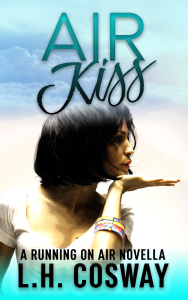 Leanne Simmons and Callum Davidson are complete opposites. As soon as they meet they know they won’t get along. However, for the sake of their TV show they agree to put their differences aside, but it’s not as easy as they think.

For one, there’s the unexplainable physical attraction they can’t seem to shake. And for two, everything out of their mouths seems to rub the other the wrong way.

Leanne wonders how she can be attracted to such a careless, narcissistic playboy.

Callum wonders why he can’t get a girl who dresses like a boy out of his head.

In Air Kiss readers will get to experience first-hand the trials and tribulations of the pair during the early days of Running on Air. 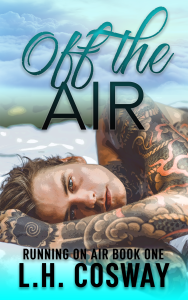 Spending a month filming a reality TV show with your ex is no picnic.

Especially when you’ve signed a contract stating that the two of you will not, under any circumstances, have romantic relations while filming.

Leanne Simmons and Callum Davidson never had an easy relationship. From enemies to lovers and back to enemies, they’ve been on again/off again for years. Things come to a head when Callum gets into an altercation with a rival for Leanne’s affections. Their management decide enough is enough and give them both an ultimatum: sign the contract or leave the show.

Unwilling to give up their livelihoods, Callum and Leanne sign on the dotted line. However, like always, they can’t resist making a bet. Callum thinks it’s only a matter of time before they break the agreement, while Leanne is determined to see it through.

Can she resist him for an entire month without losing her sanity? And what if this is the one bet that finally breaks them both?

Off the Air is a contemporary romance and Book One in L.H. Cosway’s brand new “Running on Air” Series. Each book focuses on a different couple and can be read as a standalone.

L.H. Cosway has a BA in English Literature and Greek and Roman Civilisation, and an MA in Postcolonial Literature. She lives in Dublin city. Her inspiration to write comes from music. Her favorite things in life include writing stories, vintage clothing, dark cabaret music, food, musical comedy, and of course, books.

She thinks that imperfect people are the most interesting kind. They tell the best stories.