At fifteen I fell in love. His name was Jake Stephens and he took the abandoned, lonely girl I had been and made me whole. His love was a pure and unconditional love that made every day better than the last…a fairy tale of my very own.

But this story isn’t about Jake. It’s about Abel Madden; the man I meet after the fairy tale goes to hell. A cocky, arrogant man who says what he wants, does as he pleases, and makes no excuses for it. He irritates me—downright pisses me off at times—but he also brings me back to life.

My name is Sidney Ellis and this is my story of finding love twice—the first when I needed it most and the second when I never saw it coming.

I have been on a kick of second chance romances lately. But Collecting The Pieces wouldn’t be considered as a typical Second Chance Romance and that’s exactly the beauty of this book! 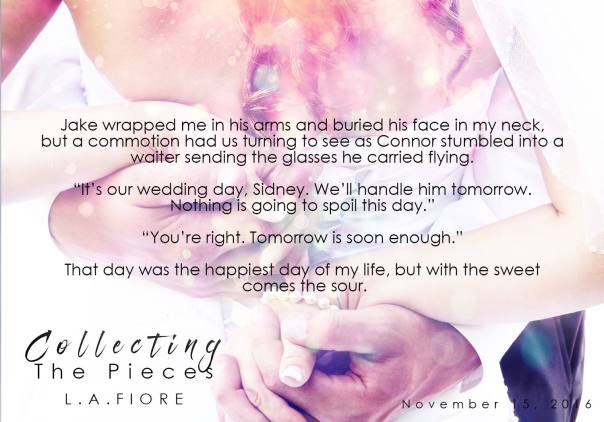 Sydney Stephens nee Elis is an orphan. She is placed with a foster family at the age of 10 and is left to her own devices; not being abused per say, but being neglected – but it is also where she found her own family in a boy named Connor; a brother she never realised she needed but found anyway.

But she also found the love of her life – a boy whom she crushed on and the man she fell in love with – what do you do when you realise the life you were supposed to lead happily ever after is cut short in the most brutal way possible?

Abel is a mechanic – and a man who doesn’t even believe in committed relationships. He is back to town, to help a friend in need; not that she has made it any easier for him. Abel isn’t sure that meeting the town’s new vet, in the most unusual circumstances is the best thing for him; especially considering that she is married.

Sydney is a wonderful strong resilient heroine and it is easy to admire her for how she handled everything that has been dealt with – and trust me, she has been dealt with a whole lot of rotten hands. A new beginning, a new life for her, and she has dealt with every twist and turn like a champ – but I couldn’t help but feel for this lady – and while I doubt I would be BFFs with her in reality (because really, I would be in too much AWE!!), she is a character that I would definitely end up going for advice!

And can I just say how much I adored the connection between Abel and Sydney?  Not only are they total opposites of each other, yet fit each other like puzzle pieces – pieces that they both helped each other put together!

This romance, a first for me by L.A. Fiore isn’t just a romance, it the telling of a life that might not have started with love, but was definitely filled with love, happiness and pure joy! ❤

1 thought on “ARC Review: Collecting The Pieces by L.A. Fiore”