Check out my review for this hilarious and favorite debut romance, a little sneak peak and an awesome giveaway on the blog today!

Enjoy your visit lovelies, and don’t forget to let me know whether I enticed you well enough to try out this brilliant new book! ❤

What’s worse than losing everything? Try driving a phallic-shaped RV across the country with your vile womanizing coworker.

Copywriter Callie Murphy has a bad attitude, a vicious tongue, and a serious aversion to Shimura Advertising’s resident manwhore, Walker Rhodes. Know where he can stick his good looks and Southern charm? She can think of a few creative places. Avoiding him wouldn’t be a problem, except her boss threatens to fire her if she doesn’t go along with him on their RV client’s cross-country tour.

Walker is sick of his job, tired of women, and in a big old creative rut. The upcoming client road trip is just what he needs to shake things up and rediscover his lost passion. But his plans go south when his partner drops out at the last minute, and Callie, the foul-mouthed tiny terror, takes her place. Unless he can find a way to thaw his icy coworker, he’s looking at two month’s of pure hell.

On the road, they experience one hilarious misadventure after another and soon find themselves on a life-changing journey. But when their paths veer off in different directions, will they hit a dead end?

Road-Tripped is a stand-alone novel and the first book in the Ad Agency Series.

THIS WAS HILARIOUSLY BRILLIANT ROMANCE! The detailed road trip, the intense chemistry and connection between the characters was not only rib tickling worthy but also heart-warming! Not to mention, the perfect balance between humor, vulnerability, sarcasm and angst made it a ride that I really never wanted to end! For a debut novel, not only was it a brilliant one, it was also one that makes sure that it ends up on my Top Favorites this year!

“Haven’t had the pleasure to meet you yet.” He stuck out a hand. “I’m Walker.” She didn’t take it. Didn’t even give him a sideways glance. Maybe she hadn’t heard him.

“Callie.” She spun her stool and faced him with a steely glare. “And I know who you are.” Her look warned him to say one more thing, just one more thing, and she’d tear off his nuts and feed them to the wolves.

Even more disturbing, it turned him on.

He loved a feisty woman, and she was feisty, times three. Her eyes were a dead giveaway. They were the color of ice—transparent almost—and outlined in black. Against her pale, whipped-cream skin they stood out like blue diamonds on snow. Striking. That’s how he’d describe them.

Callie Murphy ala “Bluebell” is the copy editor at a failing advertising agency, an agency she got a job at because her friend owns it – or soo she thinks. She has had a really heard time of it lately; and she hasn’t exactly been able to get over it nor has she been able to grieve properly! She is also surrounded by idiots, or people who have absolutely no interest in working, but would rather party! And biggest bane of her existence is Walker Rhodes, the resident charmer, who she believes is a colossal man-slut and definitely someone to avoid.

In essence, Walker was Shimura’s sacred white buffalo—women worshipped him. Oh how the office ladies swooned over his slow syrupy Southern charm. They practically fainted when he held out chairs, opened doors, let them sit first, and stood when they did. That reaction was somewhat understandable. After all, perfect gentlemen were the last of a dying breed. And let’s face it, hot perfect gentleman were damn near extinct.

Handsome, gentlemanly, smart, and talented. Walker seemed like the perfect catch. Except for one thing.

He was a colossal manslut.

Walker Rhodes, is the official photographer for the advertisement agency – not the job he wanted to be in nor the kind of place he had dreamt of in his career, but he still keeps a smile on his face, but has made some major decisions to change his life. All he needs to do is clear this one teeny-tiny road trip for their biggest client and he can be done!

It isn’t hard to see right off the bat, that both Walker and Callie have serious misconceptions and wrong assumptions about each other. So I was honestly excited to see how they would prove each other wrong – and EVERY SINGLE ONE OF MY EXPECTATIONS WERE NOT ONLY MET BUT WERE EXCEEDED! 😀

“Pretty proud of yourself, huh?” he said.

“Ever feel like less of a man because you can’t park?”

“My bedroom skills make up for it.” He winked.

From their banter, to their slowly opening up to each other, to their intense chemistry and their adventures, it was one hell of a road trip and one amazing journey to finding their true love (and my OTP!). It was such a hilarious ride, but it wasn’t without their fights, bitterness and anger and bouts of charming sweetness that never failed to leave its mark on my sul!

Beautifully written, this is a debut novel that I have absolutely adored and it just made sure that Nicole Archer goes on my auto-buy author list for this year! Can’t wait to see what she churns up for the secondary characters she has so hilariously introduced in this one!

Maybe she was still drunk. “Say that again?”

“You.” Did he even know what dating meant?

“And you’re not gonna sleep with other men. Or look at them. Or talk to them. Or stand in the same room. Basically, I’m gonna need you to wear a burqa from now on.” She squinted a sideways glare.

Chuckling softly, he slipped the robe off her shoulders. “I’m kidding, but you’re mine, okay?”

It still didn’t seem kosher. “Does that mean we’re boyfriend and girlfriend?”

“And lovers, and friends, and coworkers, and artists, and humans, and anything else you want to call it, as long as we’re together.”

A dissecting blue glare hit him. He groaned. “Christ, now what?”
“Out of curiosity? Do you come on to every woman you meet?”
He draped an arm over the back of the booth. “Aw, Bluebell, are you jealous of that sweet waitress?”
“Oh, yeah,” she said, examining her fingernails. “Horribly.”
“I was just being friendly is all. Not that you’d know what that is.”
“Friendly?” She rubbed her chin. “Is that the hillbilly translation for acting like a dick?”
Getting all bent out of shape wouldn’t do him any good—that’d just give her more ammunition. He needed to stay calm or at least appear to be calm. He stretched his legs in the aisle and put his hands behind his head. “I know it’s difficult, Bluebell, but try to focus on something besides my dick.”
“It’s hard when it’s over six feet and spewing bullshit.”
“Oh, it’s hard and spewing all right.”
With a loud exaggerated sigh, she stuck the menu in front of her face, cutting off eye contact, as well as his awesome retort.
After a peaceful few minutes of Callie shutting her pie hole, the waitress returned for their order. “Tell me about the Intercourse special, pretty girl.” He dialed up the Cheese-a-Tron 3000 for his coworker’s benefit. Poppy chattered on about the amazing steak until his ears bled.
“Perfect, darlin.’ We’ll have two of those. Medium rare.” He handed the menu back. “Can’t wait to see what you have for dessert.” He winked. It was kind of an asshole thing to do, leading her on, but pissing off Callie gave him such a perverse thrill.
An ice cube hit him in the head. “Ow!” He rubbed his head. “Are you insane? Do I need to hide sharp objects from you?”
“Did you just fucking order for me?”
“Thought you could use a nice big piece of meat. Not sure how you’re gonna eat it though with that filthy mouth of yours.”
She gripped the table. “Ever consider I was a vegetarian.”
Of course she was. “No wonder you’re so violent.”
Bogus laughter roared out. Eventually, she stopped and wiped fake tears from her eyes with both middle fingers. “God, you’re funny.”
They narrowed their eyes and glared at each other. Heat surged through him. What was it about that little hellcat that made him want her so bad? Clearly, she hated him.
In view of that, he gathered his scattered wits and headed for the jukebox. “Evil Woman” blasted from blown-out speakers by the bar a moment later. Chuckling, he hurried back to the table to see if the devil had heard her theme song playing. Unfortunately, Poppy showed up right then, bearing juicy steaks and a flirty smile.
“Thanks, beautiful,” he said. “Bet they’re as delicious as you are.”
Callie snorted. “Un-fucking-believable.”
Poppy frowned and dragged her feet back to the bar.
“Something funny, Bluebell?”
“What the fuck! Why do you keep calling me that?”
“’Cause of those great big blue eyes of yours.” He grinned. “And because you’re so dainty and sweet, just like a bluebell blossom.” The truth? He’d come up with the nickname at the Liberty Bell because her ball busting had given him the blues.
“Cute. I have a pet name for you too, but since you don’t like potty language . . .” She sliced off a piece of steak and stuck it in her mouth.
“Hold on, I thought you were a vegetarian?”
She swallowed and said, “No. I’m a don’t-tell-me-what-to-do-atarian.”

WOOHHOO!! AN AWESOME GIVEAWAY FOR YOU PEEPS!! AND THERE WILL BE 20 WINNERS!! WHOOP! 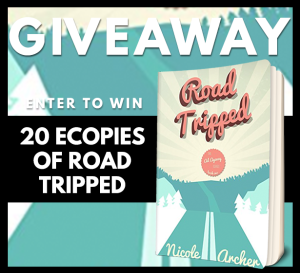 Nicole Archer’s lengthy career as an advertising copywriter not only polished her writing skills—it provided a lifetime of book material. Many months her book purchases are as high as her mortgage. As a full-time, working single mom of a beautiful, time to do much else, but work, write, read, drink wine, and breathe. She believes the best books make you laugh, cry and orgasm. In real life, she lives in Dallas, Texas, but she’d rather live in Switzerland.