Check out my thoughts on the continuing (mis)adventures of one of my favorite characters and a chance to win an awesome giveaway!

Enjoy your visit lovelies, and don’t forget to leave your thoughts ❤

Maggie Moore is leaving small-town south Georgia behind to embrace adulthood on her own in big-city Atlanta.

Finding inspiration in the unique people she’s met covering obscure sporting events, Maggie decides it’s time to fill her life with adventure – just as soon as she figures out how to cut ties with good ol’ Murphy, and his pesky laws, once and for all.

Naturally, the universe has different plans.

Before she even sets out to cover her next big story, Maggie is bombarded with old wounds and new insecurities, forcing her to choose between the reality in front of her and the promise of a dream just out of reach.

Channeling the hard-fought lessons of her Dad, Maggie struggles against the seemingly insurmountable force that is her troublesome partner, learning the hard way that things are never as easy as you think they’ll be.

Disclaimer: This is the SECOND book in The Misadventures of Maggie Moore series and is NOT to be read as a standalone.

And I was expecting more or less of the same when I started this book, excitedly!

“I’m sorry this is on you, that you’re all I have.”
John’s honesty shot straight through my wall. Damn his battering ram.
“I’m sorry you are such a pain in the ass. Sadly, it is our lot in life.”

Here’s the thing – when you have your heart broken or even your naive assumptions/illusions shattered, you turn into someone you don’t recognize – all confused and second guessing yourself (don’t deny it. It has happened to you as well!) – and that’s exactly what happened to Maggie.
Don’t get me wrong – I still adored her – but I could adore her while being exasperated with her at the same time 😛
She is still the most real character I have ever read in my life – mostly because her klutzy ways remind me of myself *grins* but it’s her realistic portrayal that ends up endearing her to me.
Did that mean that I wasn’t irritated with her at times? Sheesh, she wasn’t perfect, and there were times that I really wanted to kick her tushi, but I still persevered ’cause let’s face even real human beings irritate you at times.
I am just hoping that she grows a spine and actually gets her mouth moving and actually speaking about her feelings to those who matter *cough*JOHN*cough*

John, now John is still the grumpy old bear that we met in Fear of Falling Flat – but in this installment, you could actually see him try to be a better man – or at least a better version of himself.
He knows where he is going wrong, and he is trying to rectify that situation And I admired him for it – he tries really hard and you could *see* that – he opens up to Maggie, he protects her and he definitely tells her what she she means to him. Yes, it’s rare, but he does tell her and that is a BIG improvement over the John in the previous book!
But he still has a long way to go – and I would really LOVE it, if the author would give me more than just the ONE chapter in John’s POV!

“You’re everything I wish I could be.”
“I’m sorry?” I offered shakily.
“I told you once you were my torment, and it’s still true. You see things in a way I’ll never understand. This world has given you heartache, stripped from you your future and happiness, yet you still manage to care. How have you not hardened to it? How do you continue to carry so much light? What’s the secret, Maggie?”

Honestly, before starting this one – I was fervently praying that it won’t fall to the curse of the Second Book – it did not. But my full prognosis on this book can come only after the next book is release – which hopefully will be soon! 😛
This installment is a lot more heavy, deep and more angsty than the first one, interrupted by snippets of the hilarious effect of Murphy’s Law on Maggie – a combination that only Ms. Graves has been able to hit head on!
Read Fear of Falling Flat and then continue with this one, not only because it is a continuing story – but because you will fall in love with characters, and the ingenious plot ❤

Get a chance to win an awesome giveaway – TWO winners will receive 20$ Amazon Gift Card a well as the complete set of Michelle Graves ebooks!!

So what are you waiting for? GO. GO. ENTER by clicking on the image below 😀

Maggie Moore has been put on notice: Find a new place to live and a life for that matter.

Spurred on by her mom’s ultimatum, Maggie sets out to fulfill her dream of Life & Style Stardom, a la Martha Stewart. After a colossal failure on her first assignment, which has nothing to do with crafting or curtains by the by, she finds herself fighting to save her career.

Far from home, and struggling with the aftermath of a family death, Maggie’s already hard fought lifelong battle with Murphy, and his pride-stealing Laws, kicks into high gear. Her enigmatic world-renowned photo journalist currently sporting a chip-the-size-of-Mount-Rainier on his shoulder might have something to do with it.

Determined to succeed despite numerous bumps along the way, Maggie throws herself – quite literally – into the heart of her assignments as she travels across the country, unlocking the oddities of various obscure sporting events and surviving the World’s Most Difficult Partnership along the way. 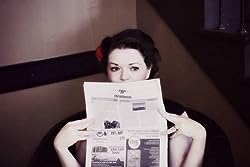 Michelle Graves is a self-proclaimed nomad, moving every two to three years with her husband the Army man, her beautiful daughter, and a fat tailless cat named Torri. When she is not writing away trying to purge her mind of yapping characters she can be found entertaining her daughter, attempting to craft (whilst trying not to injure herself with the glue gun), baking yummy treats, or reading. She admits to having a restless spirit and forces her family to go out on adventures whenever possible. They lovingly play along.