Welcome to the Blog Tour for the Sinful by Jennifer Dawson ❤

First, as always you’ll be getting my thoughts on this amazing book 😀

Second, you’ll be getting a little sneak peak into this oh so hot book! 😉

Third, you’ll be getting a small guest post by the one and only Jennifer Dawson on the most important topic of all – “How Do Fictional Characters make us strong in real life?” *YUP, I thought of that one all by myself* 😛

Lastly, but never ever the least, you’ll also have a chance of winning an amazing giveaway!!! ❤

Are you excited, yet? YES? Then by all means, let’s move forward 🙂 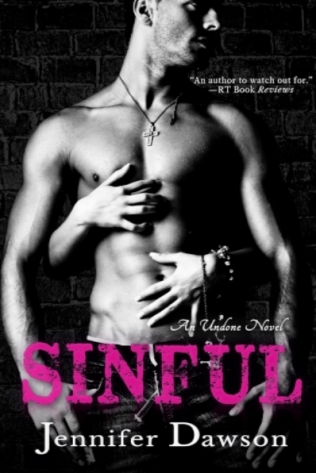 I’ve wanted my brother’s best friend, Leo Santoro, for too many years to count.

No matter what I do, he won’t confront the attraction that burns between us.

It’s time to put him behind me once and for all.

I have no choice but to call his bluff.

And then I will walk away.

The last woman I should want is my best friend’s baby sister, Jillian Banks.

No matter what I do, she won’t ignore the attraction that burns between us.

It’s time she learns the real me.

The only promise I can make is that her fantasies are no match for reality.

And then I’ll watch her walk away.

Disclaimer: This book has scenes meant only for the mature audiences.

I came across Jennifer Dawson’s work when I requested her book The Name of The Game (Something New #3) via NetGalley and I haven’t looked back since – so when the chance came up to take part in this blog tour, there wasn’t even a single hesitation in my mind about agreeing for it.

“So you want to know what this dress is about. I’ll tell you. I wanted to look my very best as I walked away.”

This book is a best friend’s sister romance – Leo Santoro is Jillian’s Big Brother, Michael’s best friend since his academy days – when Jillian and Michael meet for the first time, it’s like an explosion occurs *metaphorically of course!*

Leo is a dominant who needs his woman to be submissive – something he believes that Jillian won’t ever be! He has had something missing inside him, ever since he lost his twin in a shooting gone wrong. His friendship with Michael keeps him grounded and he has decided that he will never ever do anything to rock that boat!

“She holds my heart in the palm of her hand and she can destroy me.”

Leo is an adorable hero – *yes I called a Dom adorable. I wonder what punishment would I get for that? ;)* – I loved his way of interacting with Jillian, the way he took to their relationship like duck to water, but most of all I absolutely loved him – He is literally the package deal – A Possessive Alpha with gentle heart ❤

“You love me and I love you but instead of happiness you’re going to choose fear. You’re protecting yourself, not me. Because you know I’m the best thing that has ever happened to you. Because with me, you’re not in control all the time and you hate it. That’s the truth.”

Jillian is a woman who is a facsimile of contradictions – she is all over the place when it comes to her career, but it is her love life that is in perfect order and by that I mean that she knows who she wants and she goes after him with a vengeance!

But it is when she finally decides that she is done running after Leo, is when Leo gets his head out of his ass and finally gives in.

I loved Jillian’s character – she is that confident friend who is always on point and you can never understand how she doesn’t have self esteem problems, yet she is the one you’ll always respect and love.

But it was Jillian and Leo together that I loved the most! I mean how could I not? Their chemistry is scorching, and their connection soul deep that it literally leaps off the page and it was so much fun knowing the  Michael from before Crave! Plus, Brandon – I really am hoping that he gets his HEA soon in this series 😉

“This woman who’s haunted my dreams for as long as I can remember, who’s invaded my life and filled up those cracks inside me. Filled all that emptiness I’ve felt since my brother died. I am in love with her and she can break me.”

You know why I love this author? She takes something absolutely mundane like a “Best Friend’s Sister” romance and turns into a masterpiece. You think you are going to get the same sort of tried and tested formula – but it’s like she mixes an extra punch in her romances that you can’t help but fall in love, not just with the characters, but also with the plot and the writing.

For me, Jennifer Dawson can do no wrong and I am absolutely glad about it 😀

After my liquid courage, I leave Gwen to her prey. The guy is cute, charming, and affable. Poor thing. Gwen ate men like him for breakfast, but that was his problem, I had bigger problems to contend with, namely my increasing nerves.

I’d already planned out what I was going to do, but my plans with Leo always go awry and, despite my shots and half a drink, I figure this time wouldn’t be any different.

Regardless of how I want it to be.

But I can’t focus on that. I must focus on closure.

The first order of business is to actually catch his attention and since he stood near the bathrooms, that shouldn’t be too hard. I put an extra sway in my step, tossing my hair over my shoulder. With purpose, I walk toward my goal.

The crowd parts like I’m parting the Red Sea, confirming I look plenty delectable, but as I make my way through the room, my confidence flags. I’ve looked good before, but I was never able to sway him, was I fooling myself that this time would be any different?

I take a deep breath and slowly exhale.

It didn’t matter what he did, I was going to do things differently and let the chips fall where they may. I’ve got it all mapped out. I’m not going to hint, bat my lashes, or attempt any other such nonsense.

No, I’m going to flat out tell him my plans.

HOW FICTIONAL HEROES/HEROINES MAKE US STRONGER IN REAL LIFE?

Thanks so much for having me today.  This is a fantastic question and one I have thought about, especially writing romance.  I think romance tends to get a bad rap as fantasy, wish fulfillment (not that there’s anything wrong with that either), or a dirty little secret.  Usually when you tell people you write romance you get a lot of sideways glances, with a smirk, but I actually find it a feminist pursuit.

To me, writing romance is about the path to self-discovery, of moving past your own limits and learning to see the world, yourself and the hero in a different way.  Often in a romance novel the heroine is forced to overcome obstacle that have been keeping her stuck for years.  She has to fight and persevere against the odds against her.

So here’s how I think fictional heroes/ and heroines make us stronger:

Fight for your happiness:  Unusually when a story starts our heroine isn’t happy or fulfilled.  At some point in her journey she’s forced to reach out and take control of her life and happiness. This is true in life too; happiness doesn’t usually just fall into our laps we have to fight for it.

Perseverance:  When we read a novel, regardless of genre we know our hero is going to get knocked down, that it might break him, but that eventually he’ll be forced to get back up and try again.  This is my favorite because it reminds me of one of my favorite visual aids on success. 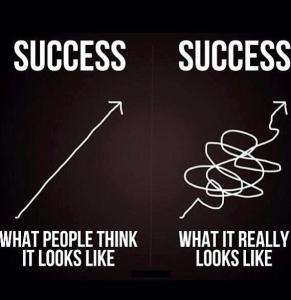 The truth is, success is a series of failures. Our hero getting knocked down multiple times over the course of our story, getting back up and starting again reinforces the importance of perseverance and hopefully gives us the strength to tackle those stubborn obstacles in our own lives.

To not settle:  Usually in a story there’s a point where our heroine has a chance to go back to normal.  To settle into the safe, comfortable routines of her life and she has to choose to reject comfort and jump head first into the unknown.  I think this is one of the most important ways romance can strengthen us in our real life, that reminder to not settle for less than we deserve.  My best friend has spent time working with hospice patients, and she said that when people are on their death bed they always talk about the things they didn’t do, the risks they didn’t take.  Settling is the regret.

Thanks again for having me and for such an intriguing question that really made me think. 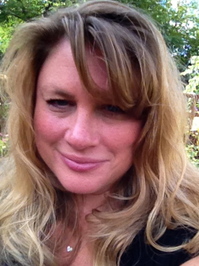 Jennifer Dawson grew up in the suburbs of Chicago and graduated from DePaul University with a degree in psychology. She met her husband at the public library while they were studying. To this day she still maintains she was NOT checking him out. Now, over twenty years later they’re married living in a suburb right outside of Chicago with two awesome kids and a crazy dog. Despite going through a light FM, poem writing phase in high school, Jennifer never grew up wanting to be a writer (she had more practical aspirations of being an international super spy). Then one day, suffering from boredom and disgruntled with a book she’d been reading, she decided to put pen to paper. The rest, as they say, is history. These days Jennifer can be found sitting behind her computer writing her next novel, chasing after her kids, keeping an ever watchful eye on her ever growing to-do list, and NOT checking out her husband.