Welcome to the Book Blast of Faith of The Nine by Sachin Dev hosted by the lovely and the sweet B00k r3vi3w Tours 🙂
Hope you enjoy the blurb of this wonderfully creative book as well as a peak into the idea behind this new fantasy book!
Enjoy your stay, lovelies ❤ 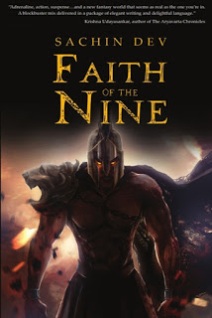 The Third Yuga is slowly drawing to a close. Nam – the greatest Empire on Janani – is going to face some fierce winds of change. Seers foresee omens of death and destruction in the return of the Banished One – A God who will claim the ashes of this world as revenge. While out in the streets, rumours abound – of older forgotten powers stirring.


Caught in this maelstrom of a power struggle between Gods are three ordinary lives: General Fateh, the most celebrated soldier in Nam who starts to question his faith, Ishan – a gifted orphan who struggles to comprehend his destiny and Abhaya – a young monk in search of truths about this world. Their choices and actions will shape the destiny of this scarred world that becomes the playground for vindictive Gods.


In a world where Rakshasas arise out of left-over traces of Maaya and twilight forms the portal to countless worlds around us for Daityas and Yakshis to dance through, a God is only as powerful as those who believe.And when Gods rise, faith of men will be tested…And broken.

The Big Idea (Story of the inspiration behind Faith of the Nine)
Visualize a big planet. Like Jupiter. And the rings of Saturn thrown together, revolving slowly. Slow enough for our mind to comprehend that it is actually revolving. And the voice that booms out in the background claiming, “I AM….TIME!”
That is obviously an anthromorphic personification of time – but that is the scene I had in mind when I thought of the name of my series, Wheels of Janani. A ginormous wheel of time rolling along unstoppably towards the end of a world.  Indian mythology has this concept of the Trimurti – or a triumvirate of power. Focused on Three Gods who are entrusted with the cosmic
functions of “creation”, “sustenance” and “destruction”. Brahma, Vishnu and Siva. And Vaishnavism claims that this yuga or epoch known as the Kali Yuga will end with the appearance of Kalki, the tenth avatar of Lord Vishnu – the world ending in an apocalypse leading away to the next yuga.  The world Janani is rolling on towards the end of its third yuga – and the Wheels of Janani or time portends an impending apocalypse that would destroy this world. A child of the Ancient Nine (an avatar – that is the descent of the divine to the material realm) is prophesied to be born into such a world on the brink of its destruction. While the over-arching theme is borrowed from the same concept as the end of Kali Yuga, I put a spin to this situation.  What if the prophecy is unclear? The avatar’s appearance in the world can either plunge the world into ashes and blood and destruction or save the catastrophe. And what is the cost of ‘saving’ the world?  At the heart of the conflict of my series is religion. And
digging a bit deeper, it’s emotional failings. Emotions for which we have no control over getting the better of reason and causing irrational behaviour leading to disastrous consequences.
So I set out to write about a thriving flourishing empire set in this world – built on a sequence of lies and deceit ruled by a set of high priests directly in communion with their God. A set of tyrannical paranoid rulers who would exterminate anyone not willing to believe their faith. Or
practice Maaya (Magic!) born of the older tenets of faith.
Into this setting I slowly wanted to build the picture of a set of survivors who doggedly stick to older beliefs waiting for the arrival of the “prophesied” child who can save them. And the world. A set of unbelievers who start to question their faith and loyalty – and slowly discover a hidden
set of reality.
Cue the bugles of war.
As we hurtle towards the end of this world, will the child of the Nine save Janani or speed up the prophecies of doom? 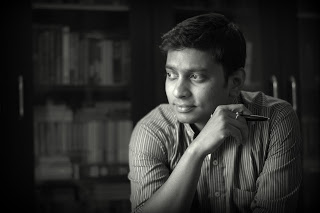 Sachin discovered Tolkien in his teens, alternative rock as a new adult and digital marketing in pretty much his late twenties. These still form a large wedge in his circle of life. Travel, radio and theatre have also figured in that ever-expanding and diminishing circle.


On perhaps a more prosaic note, he is an engineer from BITS Pilani and holds an MBA from Indian School of Business. Attribute the love for numbers and pie-charts to this. He is currently based in Bangalore and happily married to Harini. He spends an inordinately large amount of time chasing after his two dogs (who love the free life a bit too much) when he is not busy dreaming up fantasy worlds full of monsters. And beautiful Yakshis, of course.


He can usually be found ranting on twitter under the handle @xenosach, devouring books and talking about them on his blog. You can always stalk him online at his official website