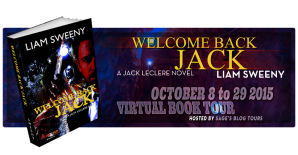 Welcome to my tour stop on the Blog Tour for Welcome Back Jack by Liam Sweeny hosted by the lovely Sage’s Blog Tours (seriously, she is amazing!).

Take a breather to read my thoughts on this brilliantly written Crime Thriller and hav a chance at winning an amazing giveaway!!

Enjoy your stay, you amazing bookdragons ❤ 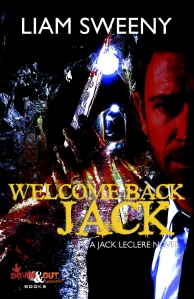 When Jack was six years old, his parents were brutally slain by a serial killer. The police later found drifter Clyde Colsen driving a stolen car, his clothes soaked in blood. He was tried, convicted and executed. Jack grew up knowing that they got the guy.

Now, Jack, a decorated homicide detective in New Rhodes, arrives at the third crime scene of the “South End Killer” murders and finds his name. He will soon find out something else: Thirty years ago, they got the wrong guy. And now the right guy’s come back to pay Jack and New Rhodes his bloody respects.

As Jack struggles to stay on the case, his cat-and-mouse with the killer makes him wonder if he’s the cat or the mouse. His family, and everyone in his life is fair game. As the killer escalates and threatens the entire city, Jack has a question he must answer in his desperation; can he stop the monster without becoming one?

I remember the good ol’ days where I used to love, absolutely love buckling down with a good mystery or a crime thriller. The ones that get your head working overtime and the ones that give you shivers when all you can see when you close your eyes is every single gruesome detail in technicolor!

I had forgotten how much I absolutely enjoyed those times and Welcome Back Jack reminded me of it – every single moment I was reading it!

We are introduced to Jack Taggart, a top detective in New Rhodes, a married man, he enjoys his life – even if it does take it’s toll. We meet at a Crime Scene – a crime scene that is brutal as it is innovative (I could give you details but I am definitely not, because it will spoil all the fun!).

When Jack gives it all to the serial killer case that he is working on, it slowly dawns on to him, that the killer himself is playing a game, a game that has it’s roots in the past, Jack’s past to be precise. For Jack’s parents were murdered brutally and their killer caught and executed. So how is it the killer from now and killer from the connected?

Liam Sweeny does a brilliant job of explaining the typical procedural drama without overwhelming the reader and he does with an aplomb that sticks with you throughout the book and even after finishing it.

We have a fast paced crime mystery, and characters that are so in depth that it was hard to get out of them! This kind of crime thriller takes you by your throat and makes you give up every single thing in your mind, because let’s face it, catching the killer is much more important than sleeping, or eating and maybe even showering (or is it just me?).

Liam Sweny is an author who just made my auto-buy list and what that means is that I just stalked him on Goodreads and pretty much added every single book on my To-Read Shelf and will one-clicking his boks once self imposed book ban is over! 😀

You know you have those days, where you really really want to stab, torture or even scratch someone’s face off but you can’t cause it’s illegal to do so? Well, this book is just for those times. You know living vicariously and all? Liam Sweeny will take care of all your torturing needs 😀

You all have the chance of wining a Signed Copy of Welcome Back Jack!! I loved this book, and you will as well 😀

All you need to do is click on the image below to enter! Fair warning? I am also in competition 😛

Liam Sweeny has worn many hats in his life. In addition to being a writer for ten years, he has been an artist, musician, grassroots campaign staffer and spent four years in disaster response, both in leadership and in the field.

It was in the field in New Orleans that Sweeny got his start as a writer. Hurricane Katrina, and his role in the relief effort, fueled his early writing, where he began in sci-fi/fantasy before transitioning into crime, mystery and noir.

As a crime writer, Sweeny’s work has appeared in many publications, such as Thuglit, All Due Respect, Near to the Knuckle, Shotgun Honey and others. You can find out more at www.liamsweeny.com