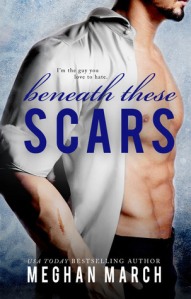 I’m the guy you love to hate.

In every story in my life, I seem to end up playing the villain—and I’ve got the scars to prove it.

That role works fine for me, because I’m sure as hell not anyone’s hero.

I run my life and my empire with an iron fist—until she knocks my tightly controlled world off its axis.

She’s nobody’s damsel in distress, but I can’t help but want to save her anyway.

I guess we’re about to find out if there’s a hero buried … beneath these scars.

I received an eARC of the book via NetGalley in exchange for an honest review.

Disclaimer: This is the 4th Book in the Beneath Series by Meghan March, but can be read as standalone.

For the sake of full disclosure – I have to tell you, I did not know that this book was a part of the series. All I read was the blurb when I requested this book and the fact that I did love the Adult Dystopian books written by Meghan March – Flash Bang and Hard Charger – so it wasn’t a big leap into requesting this book.

I went into this book blind, so it took me a few pages to orient myself, because at the start itself the situation that opens up requires the backstory that I didn’t have, but Meghan explains it well enough that I didn’t require stopping to go read the rest of the series and for that I am quite thankful because I really didn’t want to stop reading this book long enough to read the rest 😀

“Everyone lives according to the laws of Lucas Titan. You just don’t know it yet.”

It doesn’t take me long into the book to realise that Lucas is an arrogant jackass who is considered to be a heartless villain – why I didn’t know but it had to do with some blackmailing scheme he had going on with another character! And this is the plot within the first chapter itself!

But villains with a badass arrogant attitude and goodness they try so hard to hide is my kryptonite and Lucas Titan pretty much hit every single weakness I had. It didn’t take long for me to understand that Lucas is a good guy, but that good guy is hides under all the layers of insecurity because his story is one that we have all heard, but never lived (hopefully!).

Yve on the other hand, is a fiercely independent woman who has one of the most violent pasta a woman could actually have and walls so thick that even though they try, even her friends can’t get through.

“Because despite the fact I’m an asshole, I’m not the kind of asshole who’s going to let you face whatever the hell is going on here by yourself.”

Lucas and Yve have an explosive chemistry – chemistry that is based more on hate attraction than it is on mutual liking, but as they say hate and love are the opposite sides to the same coin – you never when you might end up with which side. And that’s exactly the case with these two.

This is one of those books that has everything – from a brilliantly written plot to amazing characters to perfect romantic chemistry – that you actually feel satisfied when you are looking at the end of the book. You know that you have gotten everything you could ever want from a book!

So you know what I am going to do now? I am going to go one-clicking on the rest of the Beneath Series, because if this one was brilliant, then they must be as well 😀

“No one makes it through life without scars. It’s impossible. But they’re not signs of shame; they’re badges of honour showing that you fought and survived. That’s why I’ve never hidden mine, but you’ve never moved on.”

This is an unequivocal recommendation! No if’s, no but’s. Just check it out 😀

2 thoughts on “ARC Review: Beneath These Scars (Beneath #4) by Meghan March”