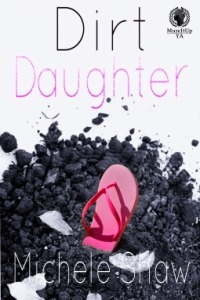 In Dirt Daughter, seventeen-year-old Elena Black has concealed the secret to her childhood friend’s murder for eight years. With the possibility of a college scholarship looming, she plans to keep that secret and flee her dysfunctional home; one with a drug-addicted mother, a stepsister she just met, and a bitter, abusive uncle. But, when a detective reopens the cold case and a friend sets her up on a date with the new boy at school, the past and present collide, threatening Elena’s future plans…and her life.

I received a digital copy of the book via NetGalley in exchange for an honest review.

Elena has not had an easy life. Her father committed suicide (allegedly), her mother is a drug addict and is married to her uncle who is also her supplier, her younger brother is asthmatic and worst of all. she is the sole witness to what happened to Lizzie, her best friend when they were eight.

Elena is now stumbling along in her life – working her butt off and keeping up her grades in school so that she can leave her town and her past behind – believing that once she does she can leave Lizzie behind as well. But truth has a way of coming out of the closet no matter what.

“I’d been a coward for so long. Afraid of what would happen to me, to my family, what everyone would think; I had to decide what to say right then.
I prayed if there was a God, he’d forgive me.”

It’s the entrance of Chayton (Not Chay but Chayton!) that turns everything in her life topsy turvy, for unknown to her, he is the cousin of Lizzie and his father is reopening Lizzie’s case. And now everything is unraveling around her and she can’t do anything about it!

This book was an interesting read albeit a little confusing! The mystery of what happened is not revealed, even at the end (not a by and by of each and everything!) but as to who did the killing, that is definitely revealed. In fact, I had to go back a few times just to understand how and where we got to a particular point in the story – although it could have been just me and my short attention span!

The writing, though seems choppy at times, and it could have been because of the single POV – another POV, especially of the killer, would have been greatly appreciated.

The characters are a jumble – beyond Elena and Chayton, everyone else seems so forgettable. Yet, they all seem to come together to make this story all the more interesting and definitely worth the read.

If you love suspense and mystery in the young adult genre – read this book. It becomes a little confusing but it’s worth a read 😀